We’d be remiss if we didn’t share an update from the South Carolina delegation’s visit to DC during this year’s National Bike Summit. All together, we were six strong, representing the following cities and communities of South Carolina: Charleston, Columbia, Lexington, Spartanburg and Greenville. 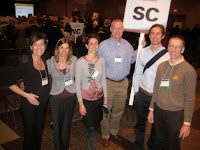 At Tuesday’s opening dinner, we were inspired by words shared from US Transportation Secretary Ray LaHood, and Wednesday we were equally wowed by Congressman Earl Blumenauer, Janette Sadik-Kahn (Commissioner of the NYC DOT), and Ken Salazar (Secretary for the US Department of the Interior). Breakout sessions filled the day on Wednesday with informative workshops on a wide array of issues, including one in which our very own (and 4-months pregnant) Amy Ryberg-Doyle spoke about the innovations happening in Greenville from her perspective as a City Council leader. 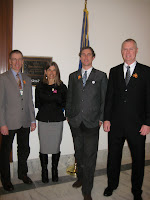 With Thursday came the visits to our members of Congress. Bicyclists interests in South Carolina were well represented at each of the eight meetings with members and staff. We began the day with Senator DeMint, ended the day with Representative Clyburn, and had a meeting at the top of every hour in between. Our message was simple: maintain crucial federal funding programs that support bicycling in South Carolina. We had the opportunity to meet with the staff of our four newly elected officials (Reps. Duncan, Gowdy, Scott, and Mulvaney), and we look forward to working with in the years to come.

Although Summit is quite a time and financial commitment, there is no better way to maximize your influence as an advocate in South Carolina than a whirlwind 2.5 days networking with colleagues and speaking with Members of Congress. We are so appreciative of our friends that were able to join us this year, and we look forward to having equally strong representation in years to come.