May 9, 2011/PCC/Comments Off on Commercial center revitalization and transportation

Earlier this year, South Carolina became one of the first states in the nation to introduce legislation that addresses barriers to redevelopment of vacant shopping malls and centers. With House concurrent resolution (H.3604), introduced by Rep. James Smith, such abandoned shopping centers are targeted to be revitalized in a more sustainable matter.

So, what does this have to do with biking?

Well, it just so happens that land use and development greatly influences our transportation decisions. Studies reveal, and practical experience verify, that people are much less like to travel by bike or foot when there are significant barriers in their built environment. These barriers include traffic speed on a corridor, number of travel lanes on a road, separated zoning issues (ie. when commercial and residental regions are clustered and not mixed), and other factors. However, when land use is well planned and these barriers to active transportation are removed, biking and walking becomes more accessible and mode share increases. 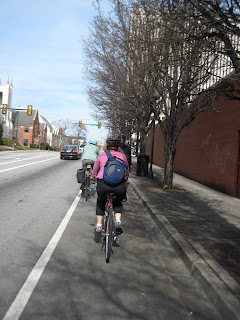 The good news for South Carolina is that many of the abandoned shopping centers cited in this resolution are located on roadways that are “well placed regionally for service by streetcar and bus rapid transit, as emerging transportation option.” Not only are they well placed for transit, but they are more likely to be accessible by foot or bike than the enormous shopping centers that are popping up all over the country.

Just last week, this resolution passed favorably out of the House Labor, Commerce and Industry Real Estate subcommittee, and now it is headed to the full LCI committee for review. It is the third item on the agenda for Wednesday’s meeting.

Because we have passed the crossover date of May 1, there is no chance of this resolution passing the full legislature before the end of the 2011 session. However, since we are currently in a two-year session, it will be back on the agenda in January of 2012.

If this concurrent resolution is successfully approved by the Legislature, it will not have the power of an ordinance in its rulings; however, the language is a significant step in facilitating cooperation among state and local partners in fostering communities that encourage people to engage in healthy, active lifestyles.

We’ll be at the meeting on Wednesday and will be eagerly following the progress of the resolution. Stay tuned!