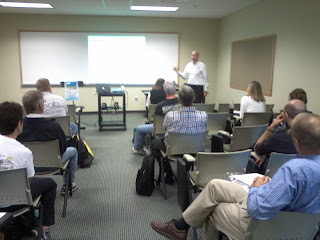 The 2012 Georgia-lina Bike Summit is over, and we feel confident in saying it was a great success. We’d like to thank our Georgia partners for including us in the Summit; the experience has given us a wealth of ideas for future efforts and events.

Friday night, we heard Dennis Markatos-Soriano speak about the East Coast Greenway and its efforts to create an urban greenway connecting the entire eastern seaboard. South Carolina’s coast makes up 291 miles of this greenway, and Dennis’s goal is to have it completed by the time his son is grown to allow the next generation to enjoy bicycling and walking as a simple and practical form of transport. For such a large scale project like this to be completed, we need states and groups to work together, collaborate and share experiences, which just so happened to be the theme of the Summit. 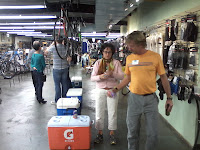 Summit After Party at Outspokin’

Saturday kicked off with an opening address from BikeLaw.com’s Peter Wilborn outlining the importance of bicyclists’ rights and standing up for ourselves as we work to create safer roadways for all users. Randy DuTeau followed, representing both the Augusta Sports Council and Wheel Movement, and discussed the beginning of the two-state regional advocacy group, arising out of the tragedy of the death of his friend, Dr. Matthew Burke. We were treated to a keynote address from Jeff Miller, president and CEO of the Alliance for Biking and Walking, at lunch. The Alliance works to assist advocacy organizations from all over the country in their work, giving them a perspective that those of us working at the state or local levels don’t often see. Jeff showed us what Georgia and South Carolina could become one day and gave us a new way to look at the real outcome we’re working towards. For example, do we want bike lanes that protect parked cars, or parked cars that are used to protect bike lanes? The day ended with Brent Buice and our own Amy Johnson outlining the work of our two statewide organizations and highlighting each of our successes and challenges.

It was a pleasure to meet many of you at Outspokin’ Bicycles that night and hear how excited and enthusiastic so many attendees were about what they’d learned during the day’s many sessions and how they could use that to better their homes. The Coalition works best when it is just that, a coalition of groups and individuals working toward the same goal, and we were energized as well by those we met and connected with during the summit. We can’t make any promises now that we’ll be able to do such an event again next year, but we are weighing our options to determine how we can best bring something that so effectively spreads knowledge and passion for our own state. If you would like to give us your feedback, please go to this link and take the following short survey.

Top of the Podium Sponsor