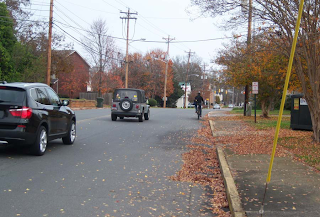 Rock Hill is an up-and-coming bicycle friendly community in our state for a number of reasons, not least of which is the recent Handlebar Assessment conducted by the Bicycle and Pedestrian Task Force.

The Task Force, made up of city planners, engineers, public health officials, city residents and decision makers, conducted the assessment by getting an on-the-bike perspective on the problems and difficulties faced by alternative transportation users in Rock Hill. As current conditions are unsafe and unfavorable to bicyclists, the Task Force analyzed the opportunities and constraints to adding bicycle infrastructure downtown, around Winthrop University and along various connector routes. This assessment comes after a 2010 study by the Task Force that showed 80% of respondents would ride more often if conditions were safer.

In the Task Force’s report, there is a common pattern with many of the reviewed roadways. Many were wide, and had room to accommodate car and bike lanes. These roads also serve as a good network to connect the University campus, downtown, restaurant and retail areas. Several roads are due for repaving and restriping projects, offering an ideal time to get bike infrastructure added to the road design. On the negative side, not all of these roads are owned by the city, requiring better partnership and communication between SCDOT, Winthrop and the City of Rock Hill. High travel speeds and on-street parking pose problems for bike infrastructure. Special multi-modal consultants would be needed to analyze intersections on the roads as well.

These hurdles are certainly not insurmountable, however, and the Task Force is moving forward on their goals to make Rock Hill more bike friendly. This formal assessment and the opportunity it presented to get key decision makers on bikes to understand the problems faced is a wonderful format, and possibly the first such official assessment we have seen. This method could be very helpful to any other cities looking to develop plans for bicycle and pedestrian infrastructure; we look forward to more and more cities in South Carolina taking steps toward more liveable, walkable and bike-able communities.