The Economics of Bike/Ped in South Carolina

August 1, 2013/Amy Johnson Ely/Comments Off on The Economics of Bike/Ped in South Carolina 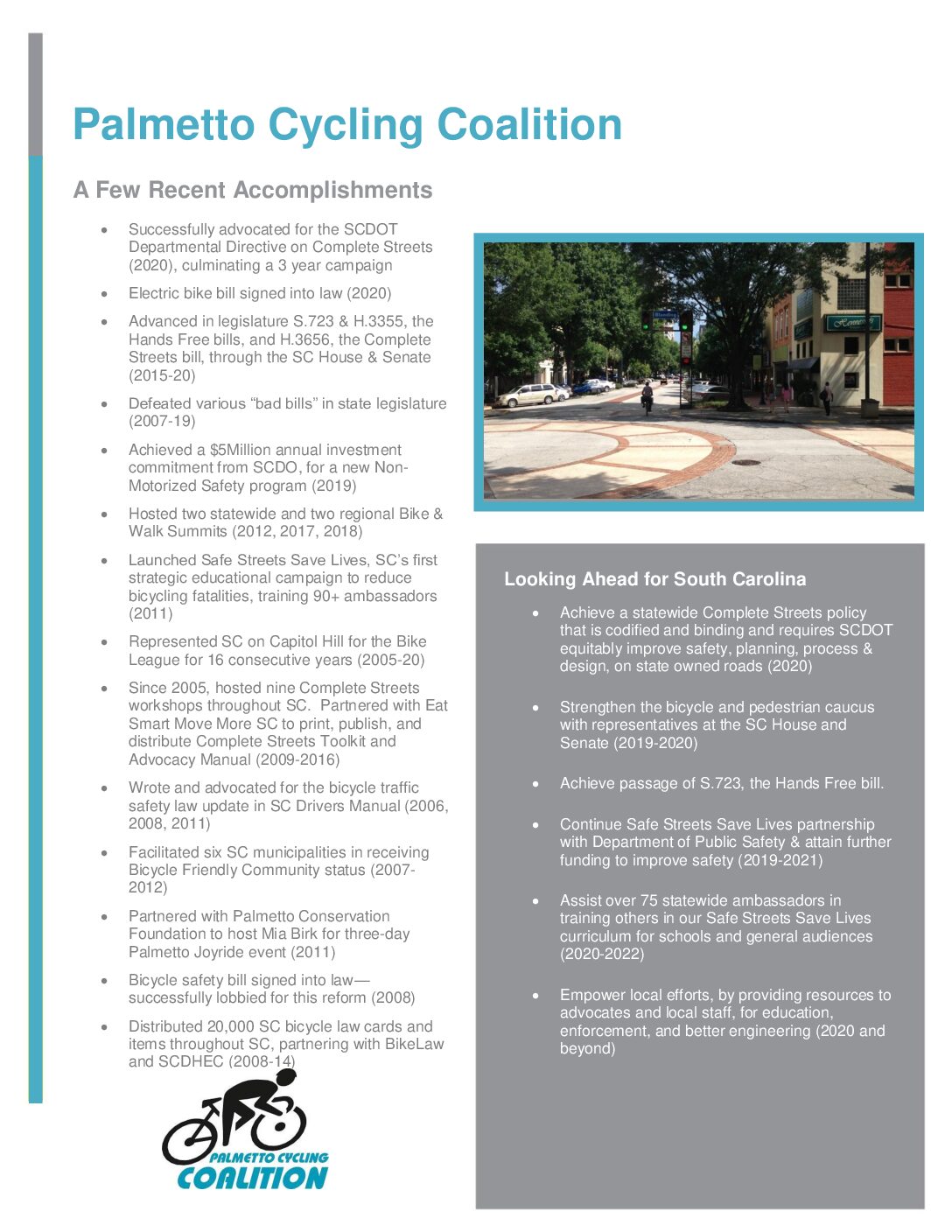 We know the Department of Transportation has more than enough challenges on its hands. Our roads aren’t in good condition. Money is scarce, and no one seems up to the challenge of finding better ways to fund our transportation needs.

We are fully aware of the crisis our state faces with the condition of its roads. We also do not question the fact that the Department must prioritize the operation of motor vehicles. We also appreciate that there are not enough dollars to make ends meet when it comes to our transportation needs.

But even with the dollars it has on hand, the Department frequently overlooks the equitable distribution to modes other than motor vehicles.

Especially in urban areas, there’s an explosion in the number of people on bikes. It’s not a joke. It’s a mode of transportation. It’s not frivolous people in funny clothes. It’s now people going to work, or to school.

It’s not a joke because it’s a way for our population to become healthier. It’s not a joke because smart, physically active people deciding where to take a job take it into consideration. It’s not a joke because people are using it to get to work – or an errand – a couple of miles down the street. Providing for transportation by two wheels goes hand-in-hand with economic competitiveness. Building a complete street creates more local jobs than widening a highway. A complete street serves every segment of the population, even those that can’t drive. People spend twice as much on their own personal transportation as they did 50 years ago. But the trend is reversing. Also changing is where South Carolinian’s live. While rural areas have remained stable, the urban South Carolina population increased by 20% in the last decade. This explosion in bikes and urban living means what folks aren’t spending on gas is being spent elsewhere. It’s a choice people are making in how they will get around. Are we going to build our roads so they retain that freedom?

Times are changing, fast. The Department is not keeping pace with the changes. Often, people like me have to work all too hard to persuade the Department to consider creative solutions that put bike lanes on roads it’s re-paving. Often, it seems the thought just never occurred to the Department.

We won’t even talk about the willy-nilly rumble-strips that drove people on bikes off our roads, or endangered more lives than it could possibly have saved.

Two-wheeled transportation is a factor. It’s a factor that should be built into the autonomic reflexes of SCDOT. New Project? Repaving? Cars—check. Bikes—check. Pedestrians—check. We need a statewide Complete Streets policy that implements this, and we need to measure road performance by including the safety of pedestrians and bicyclists.

Failure to adapt will be one of the factors that keep us behind – in health scores, in economic competitiveness, and in the very important, elusive, happiness factor. What is our quality of life and how does our transportation system contribute to it – or not? When North Carolina’s DOT built bike facilities on its Outer Banks, the Department studied the economic impact and recorded a return of nine times its original investment. And there’s more. Charleston’s Chamber of Commerce studied this and said we need a multi modal transportation system to attract high earning professionals to our cities. And our own SC Municipal Association gets it. They recognize higher numbers of people biking and walking, and they admit it’s because it’s the affordable transportation choice.

Our local governments “get it”. We need our state DOT to get it now. If they don’t, our local economies will suffer. It’s about building smart transportation that doesn’t only move folks fast between cities. Our Department must work well with local governments who are trying to build accessible Main Streets. Companies know business is better on an attractive Main Street, one that isn’t full of cars and congestion but sidewalks and people.

The State of North Carolina has eight people assigned to this mission. We have one. It shows. Our local cities get it. The people of South Carolina get it. Now we need to help our own state’s DOT get it.