How we will arrive at Safe Streets

This morning, in Columbia, representatives of the Safe Streets Save Lives Project Team stood alongside Secretary of Transportation St. Onge, Director of the Public Safety Leroy Smith, Office of Highway Safety Director Phil Riley, and SC Strategic Highway Safety Plan Manager Emily Thomas to unveil the next phase of Safe Streets Save Lives, an education and awareness campaign about bicycling and the law. Below are remarks that I shared with those that joined us.

The need for a strategic bicycle safety campaign, like Safe Streets, is tremendous. In the past decade, South Carolina has been ranked in the top ten nationally for fatalities, and in most years the fatality rate in the state has more than doubled the national average. The 2012 US Bicycling and Walking Benchmarking Report, released earlier this year, revealed that South Carolina is the second most dangerous state in the nation for bicycling.

Although it is very clear that much work lay ahead in improving bicycle safety on our roads, a couple of developments in the past few years offer a step in the right direction. One such advancement includes the reform to our state bike laws, which were signed into law in 2008 by former Governor Sanford. These reforms, viewed as some of the most progressive and leading in the nation, work to create a safer environment for bicycles while riding roads in the state.

Our bike laws are some of the best in the country, but without proper education and enforcement, they are doing us no good. Thus, in 2010, the Palmetto Cycling Coalition joined with long-time partner Bike Law, a South Carolina legal resource and advocacy team, to develop Safe Streets Save Lives, a campaign to improve bicycle safety on SC roads through awareness and education. The Safe Streets campaign began with a private investment by Bike Law and other financial partners around the state. The Coalition and Bike Law used these funds to launch the foundation of the campaign which included: the development of four video public service announcements about bicycle and motorist rights and responsibilities; the creation of a website; and the production of collateral materials for the campaign.

The Safe Streets campaign is all about mutual understanding and empowerment when it comes to cars and bikes sharing the road. For South Carolina roads to become safer, motorists and bicyclists must together understand their respective rights and responsibilities, and uphold these values. With an environment of mutual respect, together we can improve bicycling in our state. And when the roads become safe for bicyclists, they become safer for all road users.

As the Coalition and Bike Law began to identify the next steps of the campaign, it made sense to bring in two vital partners with whom we share common goals. Through the South Carolina Strategic Highway Safety Plan, we share a mutual mission of reducing bicycle fatalities with two state agencies: the South Carolina Department of Public Safety and the Department of Transportation. Thus, last year, the Coalition, Bike Law and these two agencies began discussing ways to partner.

Today, it brings me a tremendous amount of pride to announce that in a public/private partnership between our respective agencies, we are taking the Safe Streets campaign to the next level. Through this collaboration, we are striving to broaden public awareness and education about South Carolina’s bicycle laws. With the completion of this phase of the campaign, more South Carolina bicyclists and motorists will be familiar about their respective duties when it comes to sharing the road.

To achieve that vision, this phase of the campaign focuses on two primary areas: public outreach and public relations. In this way, we will be able to tell a more colorful, layered story about South Carolina’s progressive bike laws, its cyclists, and how we can all share the road to get there together. We will also develop a curriculum to coincide the Safe Streets campaign. With this curriculum we will be able to offer our fellow bicyclists, teachers, law enforcement, and many others the tools to make a direct impact in their community.

The Safe Streets campaign began as an idea in 2010, and with a small investment of private dollars was unveiled in 2011. And today, nearly a year later and just days before bike safety month, it brings me much enthusiasm to announce that this initial investment will be boosted with funds from the state safety plan. I want to extend my thanks to the Secretary and Director for their leadership and support, and for the opportunity to work with the talented teams at both DOT and DPS. 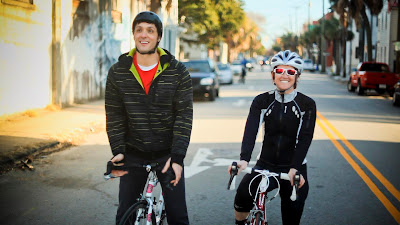 Through this partnership, we will collectively strengthen common efforts, expand capacity, and ultimately improve bicycle safety in South Carolina. We can move South Carolina in the direction of a safer and healthier state, and better bicycling offers the opportunity to do just that. Whether it’s a Sunday afternoon family ride or a bike commute to work once a week, the more bicycles on the road, the better for us all. Let’s get there together.

3 responses to “How we will arrive at Safe Streets”