SC motoring fatalities down for 2011. But what about bicycle fatalities?

December 22, 2010/PCC/Comments Off on SC motoring fatalities down for 2011. But what about bicycle fatalities?

Our Department of Transportation reported yesterday that for 2011, South Carolina is on track to have fewer than 800 vehicular-related fatalities.  Historically, annual deaths on SC roads have been less than 800 only twice in the last 47 years–in 1963 and 1987.  DOT officials are using this as an opportunity to remind the motoring public to be extra cautious during the Holiday season where travel on SC roads reaches its peak.

DOT officials are associating this reduction in fatalities on several factors: the increased enforcement by Department of Public Safety (DPS); the increased use of seat-belts and child restraint seats; and the installation of rumble strips on more than 2,800 miles of state roads.

Although we’re delighted by this news, we’re wondering how bicycling-related fatalities are faring in comparison.  Yes, we are on track to have fewer fatalities this year than previous years (as we reported in a blog post earlier in the month); but, historically these numbers are not showing near the improvement as are general vehicular-related fatalities.  South Carolina’s per capita fatality rate continues to be above the national average, and as the Alliance for Biking and Walking’s 2010 Benchmarking Report revealed, we are still one of the riskiest states in the nation for bicycling. 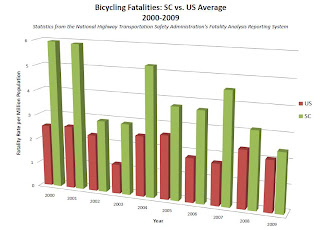 And although rumble strips do help mitigate run-off-the-road crashes and may have helped in this reduction of road fatalities, they continue to pose a safety hazard to other road users, namely bicyclists.  Read more on this issue here.

DOT and DPS are also attributing these improvements to safety campaigns that have been underway for a few years now.  These campaigns encourage seat belt use and target DUI prevention.  We’d like to see a similar strategic and long-term campaign by our Transportation and Public Safety officials to address the safety and infrastructure needs of bicycling and walking in SC.  According to the Benchmarking Report, 5% of trips in South Carolina are by bicycle or foot, yet bicyclists and pedestrians make up over 12% of traffic fatalities and receive just 0.4% of federal transportation dollars.  In 2011, we are advocating for a stronger investment in bicycle and pedestrian infrastructure, and a renewed commitment to ensuring the safety of all road users–not just the motoring public.