Like many of you, we mailed off our Holiday cards for wishes of healthy Holidays and a happy New Year.  However, if you don’t receive a card from the Palmetto Cycling Coalition, do not be distraught.  We sent these cards only to a lucky few–our Senators and Congressmen representing South Carolina in our fair nation’s capitol. 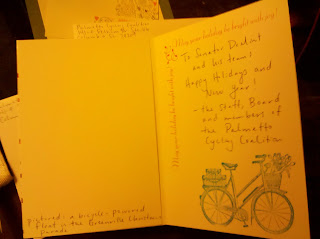 Timing for these seasons greetings couldn’t be better.  We are gearing up for the National Bike Summit in March 2011, and are also preparing for in-district visits with our House members in January and February.  During these in-district meetings, we will be meeting with our re-elected members, Clyburn and Wilson, reminding them of our efforts in South Carolina and of the positive outcome of continued bicycle and pedestrian funding.  We also hope to meet with our freshmen Representatives, Tim Scott, Jeff Duncan, Trey Gowdy, and Mick Mulvaney, to introduce our efforts and ensure they realize the good of our mission.

And speaking of Congressional seats, it looks like South Carolina is among eight states to get a new seat in the House of Representatives.  Since 2000, the state’s population has grown over 15%, justifying the need for district reallignment and the addition of a new seat.